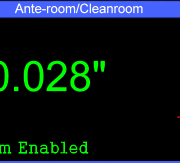 Not too long ago we were asked by a pharmaceutical manufacture why our TV2 pressure monitor showed a negative pressure indication on the Max/Min display. 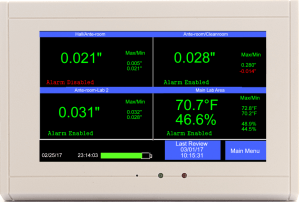 We investigated and found that if you quickly open the door into the room the pressure drops down into the negative range.  This had always been the case but he had never noticed it since he was using analog pressure monitors.  They did show the jump to negative pressure but you had to look quick since the needle swings happened fast.  The TV2 monitor, being digital, records and updates the high and low pressure, showing each in red if it is below the safety level.  So even if the room experienced negative pressure for a few seconds it is written to the display where it is very obvious.  In fact it jumps right out at anyone walking by.  That is, of course, the whole point, but this manufacturer was worried that an inspector would balk if the minimum pressure reading showed up in red.  Explaining that it was probably negative for a few seconds would not be enough to avoid ‘ding’ on the report.  Any indication of a negative pressure was a problem.  It was a problem easily fixed.  We simply set the display to not show the Max/Min.

However, this fix ignores the real problem.  Anytime the door of a positive pressurized  room is opened, all of that positive pressure air can and often does spill out into the hall where it is instantly mixed with the outside air and then sucked back into the room.  And, of course, it brings with it any and all suspended particles so that now the cleanroom is no longer clean.  Or at least as clean as it needs to be.

There are actually three solutions to this problem:  1.  Open the door verrrry slowly;  2. Install large capacity blowers that turn on any time a door is opened to maintain positive pressure; and 3.  Install a pressurized air lock so that pressure can return to positive before the door to the clean area is opened.  Each solution has its own drawback.  Option one is impractical and probably impossible to enforce.  Option two is expensive to install and may lead to increased maintenance costs.  Option three is the best solution.  In order to be effective personnel must pause in the air lock until it is re-pressurized and the in-rushing air has had time to be evacuated.  It is also important that the two doors not be opened at the same time.

Ai and Deep Learning: The Future of Cleanrooms